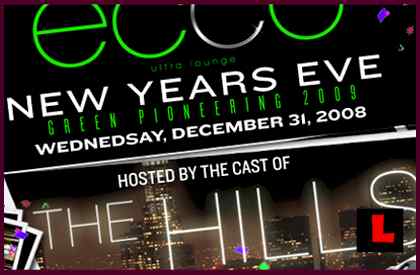 YEARS EVE can report the Cast of the Hills hosts a New Years Eve Party at ECCO.

Cast of The Hills host ECCO in Hollywood for New Years Eve 2008. (Cast member names not listed; hence, you decide what that means.)

Join Hollywood’s top A-List promoters at Hollywood’s newest “first green eco-friendly” Nightclub, ECCO as well as the first eco-club in the state of California. This one-of-a-kind event that will set the standard to all clubs throughout the country. Join the cast of MTV’s #1 hit show The Hills as they party and mingle at the newest and most exclusive club in Hollywood.